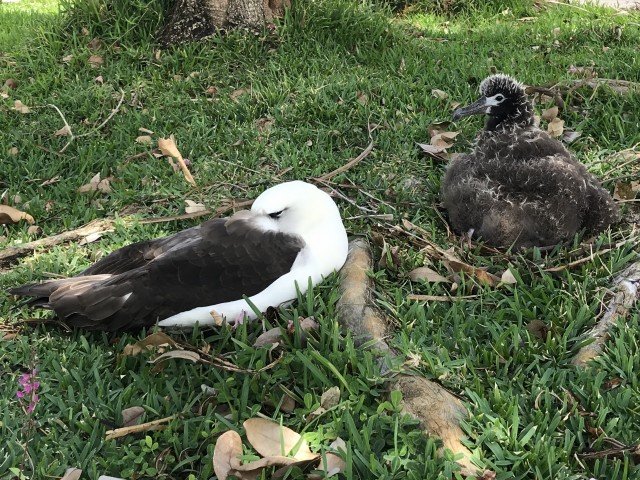 It has been a month since I reported on Pela, “my” Laysan albatross chick in Princeville, Kauai. He/she is now ten weeks old and growing like crazy. I will not know his/her gender for awhile so until then I am choosing the “she” pronoun. When she gets closer to fledging (first flight), the Biologists will tag her and pluck a feather to be analyzed. At that point we will know her gender.

Pela is on her third nest. She started in the nest her parents lovingly built prior to laying the egg from which she emerged. Several weeks later she moved to a spot next to the fire hydrant and built her own nest (see photos here). Now she is a few feet away at the base of a tree. Much better for photographs!

Yesterday I was gardening at Honu Point, our vacation rental next to Pela’s nest, and I heard the very distinctive sound of albatross communing with one another. So, I dropped my tool (any excuse for a rest) and headed in the direction of the noise, camera in hand. In the yard of a nearby neighbor I found two albatross beak to beak, both with tags on their left leg. I happen to know that Dora, Pela’s mom, has her tag on her left leg so I assumed she was one of the pair. But, who was the other adult bird? Larry, Pela’s dad, has his tag on the right leg.  Oh dear.

By the time I arrived, most of the dance had ended, but it was clear that there was still a lot of flirting going on. After a short time, one of them (still assuming it is Dora) waddled over to Pela’s nest. Best with sound.

As I moved closer to Pela, the second albatross followed suit. As you will see in this next video, the two adults still had eyes for one another. Meanwhile, Pela looked on with little interest. When each of the two birds tried to get close to the fluff ball, she would not have any part of it. Make sure that sound is still on!

I couldn’t imagine Pela reacting this way to either of her parents so, as I was watching the interaction, I texted Cathy Granholm, our neighborhood albatross historian (click here for my blog about Cathy’s walks). I gave her the tag numbers I could barely make out on each leg. Mystery solved. Neither adult was related to Pela.

It turns out that Lulu (K846) is an eight-year-old who often hangs out with young chicks. Perhaps she is in training for future kids of her own. Sammy (A349) is a young six-year-old who is clearly trying to figure out how this mating game works. With both Dora (KP889) and Larry (K229) out at sea, looking for Pela’s next meal, these two had the “house” to themselves.

Finally, my entertainment was over and I went back to gardening. Adult albatross were soaring overhead. It was a drop dead gorgeous day on the north shore and the birds were taking full advantage of the trade winds.

Later in the afternoon, I started hearing, once again, that high pitched noise only albatross can make. This time when I came up the driveway I found three young adults dancing their hearts out. Clearly hormones were pumping and these three were doing their best to impress. Two males and a female? Or, two females and a male? I didn’t want to get close enough to read the tag numbers. Either way, one would lose out and it is quite possible the other two might just end up being partners for life. Enjoy!

No matter where you are staying on Kauai, be sure to take a drive around Princeville to see these amazing birds. Nowhere else in the world do they nest among people. We are honored to have them.

Interesting Facts about the Laysan Albatross (Moli, in Hawaiian):

Months on Kauai: November to July

For a great book about the Laysan Albatross:  read Holy Moli by Hob Osterlund, available on Amazon.

For a unique, bird watching tour, check out my blog about Hob’s tours of the north shore.

The photo at the top of the page is Pela, 10 weeks old, and either Dora or Larry.

For an added bonus, yesterday I took this 360 degree view from the end of the peninsula at Honu Point. You will see why the Laysan albatross have made this part of the island their home. 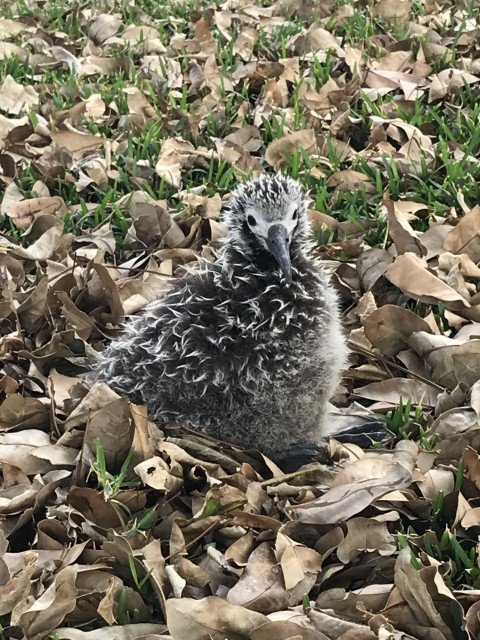 Of course he/she is “my” albatross chick because, after all, he/she was born on my birthday and I was lucky enough to get to name her. Pela means “soar” in Hawaiian and that is what he/she will do in about four months from now. With in any luck, the fledge will take place off the…

You have booked your tickets for a flight to the Garden Island and now you need to find a place to stay. Vacation rental or hotel room? The choice is easy. My husband and I have traveled extensively over the last twenty years and we have found renting a vacation rental far outweighs staying at… 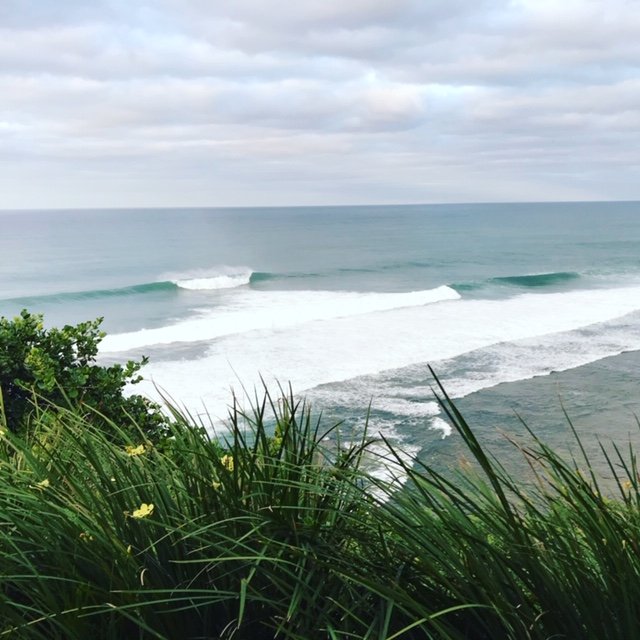 Weather and surf reports vary tremendously depending on the time of year and your location on Kauai. During your tropical vacation you may find yourself in an area where it is raining or the surf is not to your liking. You wonder what it is like on the other shores of Kauai’s coast. Following is…

I woke up to a gorgeous morning on Kauai with a walk on Hanalei Bay calling out to me. Just down the road from Princeville, I was slowed for a few minutes by the flag people stopping traffic on the hill where they are reinforcing the road. I found the first parking lot full at…

If you’re into lush foliage, exotic flowers, unusual fruit trees, beehives, chocolate, and a good time you must visit Kauai’s Princeville Botanical Gardens.  Friends of mine, Joe and Jan Marie, own over 8 acres of Paradise and have opened up their property for tours. During these three-hour educational tours you’ll be treated to gourmet chocolate,…

If you are on Kaua’i October 18th and 19th, do not miss the fourth annual Kauai Chocolate & Coffee Festival in Hanapepe, Kaua’i. Yes, it is a bit of a drive from Honu Point (about 90 minutes), but it will give you a chance to see our Historic Hanapepe Town and indulge in two of…